A Solid Foundation For Global Expansion

In 2015, Moeller Marine Products is leveraging its engineering/production capacity, consumer focus, and dominant status in the marine industry to launch a strategic expansion into global markets.

A Busy Year in Sparta, TN
2015 has been a banner year for Moeller Marine, beginning with a highly-publicized event to celebrate the company’s 25th anniversary at their Sparta, TN facility. The company has expanded sales and marketing efforts, re-designed and improved their line of portable tanks, and introduced new diurnal components. A major boatbuilder awarded the coveted Supplier of the Year Award to the Sparta-based company, and the entire organization participated in an ISO re-certification audit which yielded zero categories of nonconformance. Regionally, Moeller was voted the Upper Cumberland Business Journal’s Manufacturer of the Year.

In a recent interview, Moeller President Gary Eich was asked where the company is headed. “When you’re on top of your game, you’ve got to keep moving to stay where you are,” Eich responded. In June, Moeller disclosed their plans for strategic expansion into global markets by appointing Brunger Export as their new international manufacturers’ representative.

Formula for Success
Gary Eich attributes the company’s continued success to Moeller’s deep tracks in the marine industry, design sophistication, commitment to excellence, and a culture which fosters a dedicated and smart workforce. “So many companies today talk about innovation that the concept is practically meaningless. We point to specific achievements,” says Eich. Beginning with the introduction of barrier tank technology in 2011, Moeller has launched a new product line or design innovation each year: 2012, Redi-Tanks; 2013, internal venting; 2014, aluminum tanks; 2015, Moeller diurnal components. But innovation is only one piece of the story. “You can have the most brilliant engineers on the planet and it won’t amount to anything without people who make it happen.”

Moeller’s commitment to workforce excellence is news throughout Tennessee, where the state legislature passed a resolution recognizing the entire organization. Standards are high and the work is challenging, regardless of whether the job is in purchasing or linear assembly. “Again, lots of people like to talk about team work. At Moeller, we have jobs in the factory that won’t get done unless we are working as a team,” says Eich. Early this year, employees from manufacturing, engineering, customer service, and administration formed TEAM 25: a group which identifies community giving opportunities and organizes company-wide efforts to support them. Thanks to the motivating efforts of TEAM 25, Moeller has contributed hundreds of volunteer hours and thousands of dollars to local charitable organizations.

Moving Smartly Ahead
According to Eich, expanding Moeller’s reach is the next logical step in staying on top of their game. “We have all the necessary ingredients to prosper worldwide: infrastructure, experience, dedication. And now we have the partner to do it with,” he explains. Brunger Export’s multi-lingual international sales management team offers a combined total of more than 200 years of marine industry experience. “Our reputation is built on innovative design and technical support. Brunger technicians and sales professionals are stationed all over the world and can offer our international customers the onsite support they deserve.”

About Moeller
Moeller is the largest rotational molder in the marine industry and the fourteenth largest across all industries nationwide. Safety, durability, and value are the criteria for the design of every tank the company delivers. The company offers a comprehensive line of topside and permanent tanks, as well as delivery systems, livewells, water and waste tanks, seat substrates, and custom interior components. Moeller furnishes fuel systems or components to nearly every boat builder: from bass and ski boats to offshore salt water fishing. 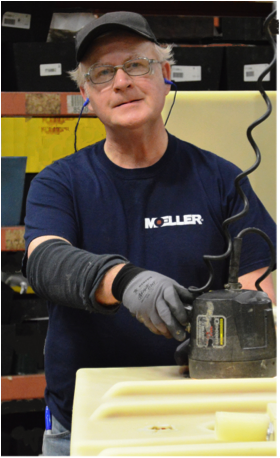 For more information, contact Moeller Marine at 800-432-8344, or visit www.moellermarine.com.